The Single-cell gel electrophoresis (comet assay) was first developed in 1984 by Östling and Johanson to analyse DNA strand breaks under neutral conditions. Some years later, Singh et al. introduced an alkaline version (pH >13) of the method that enables the detection of single-stranded DNA breaks (SSB). The alkaline condition of the Comet assay offers increased sensitivity when investigating agents that cause DNA strand breaks or induce DNA lesions that are alkali-labile. The alkaline comet assay is now often the method of choice if low levels of DNA damage are to be detected, e.g., in lymphocyte samples from the human population or in in vitro and in vivo testing of genotoxicity.

In the comet assay, cells are embedded in low-melting-point agarose gel on a microscope slide. After lysis of the cells, slides are incubated in alkaline electrophoresis buffer and DNA fragments that are caused by DNA strand breaks are separated by electrophoresis. DNA-specific dyes, e.g., ethidium bromide, propidium iodide, or SYBR Gold are used to visualise the DNA comets, as shown in the figure below. The percentage of DNA in the tail is quantified as the measure for the induction of DNA strand breaks.

To specifically detect oxidative DNA lesions, the microscope slides can be treated with formamidopyrimidine DNA glycosylase (FPG). The FPG enzyme cleaves purines that have been damaged by oxidation, such as 8-oxo-7,8-dihydroguanine (8-oxoG) lesions, leaving a single strand break. In the alkaline comet assay, this damaged DNA then appears in the tail. By comparing the DNA in the tail in the absence and presence of the FPG enzyme, the extent of oxidative damage can be assessed.

Typically, we perform the in vitro comet assay as an add-on to the ToxTracker assay. The comet assay is also performed in the various DNA repair-deficient cell lines that are applied in the DNA Repair-Profiler assay.

For the comet assay, we will collect microscope images of the DNA comets. Automated image analysis is performed using the CometScore plugin for ImageJ. All test results are collected, summarised and included in a report that will be shared with the customer. The amount of DNA strand breaks is determined and typically expressed as % DNA in the tail. The induction levels of comet tails by test compounds are subsequently expressed as fold changes compared to untreated cells. 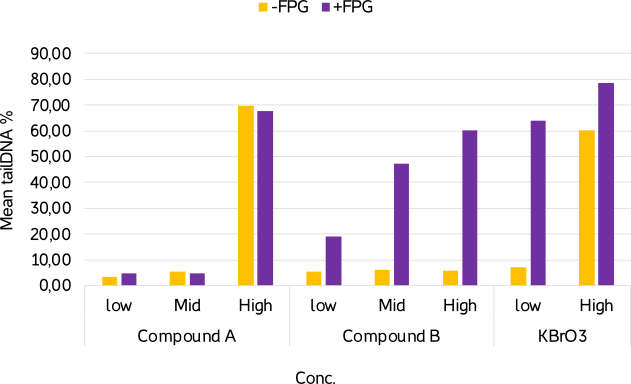 The below graph shows that the induction of FPG-sensitive DNA adducts by potassium bromate (KBrO3) can be detected in the modified comet assay. 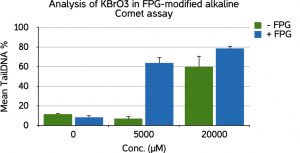 Ask a question or get a quote

We perform the in vitro comet assay as a service for our clients. You can send your compounds and receive a full report within 3-4 weeks. Are you interested in receiving a quote or do you have any questions? Please reach out!

The amount of compound that is required for analysis in the in vitro comet assay depends on the maximum concentration that will be applied in the project.

Type of solvents compatible with the assay 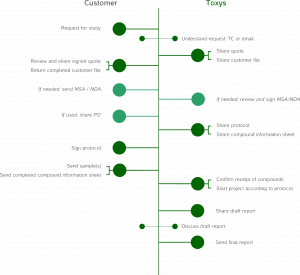 Ask a question or get a quote