TubulinTracker is a novel fluorescent reporter cell assay to investigate the microtubule polymerisation dynamics, progression of cells through mitosis and aneugenicity. The assay has been developed as followup for the ToxTracker (ACE) assay, to further assess the mode-of-action of genotoxic compounds that were classified as aneugen. However, TubulinTracker can also be used as stand-alone Tubulin polymerisation assay.

TubulinTracker is a novel in vitro assay using GFP-tagged Tubulin, that allows the direct visualisation of the microtubules using either live cell microscopy to follow the dynamics during the cell cycle or flow cytometry. The assay can be applied to study the effects of compounds on microtubule stability as well as assess the effect on the cell cycle progression and induction of aneuploidy. TubulinTracker can discriminate between Tubulin stabilising and Tubulin destabilising substances and provides more insight into the cause of aneuploidy upon exposure.

The advantage of the TubulinTracker assay is that it can efficiently detect both stabilising and destabilising Tubulin poisons and can be used to detect an aneugenic mode-of-action of genotoxic compounds. The assay can be used to study Tubulin dynamics in the context of a cell throughout the different phases of the cell cycle Insight into the MOA provided is important for hazard identification and as part of AOP and weight of evidence approaches.

Background:
Aneuploidy, the presence of an abnormal number of chromosomes, can be caused by any process that interfere with chromosome segregation during mitosis, including microtubule disruption or inhibition of cell cycle kinases, like Aurora A/B/C. To detect aneugenicity, as result of chemical exposure, typically the micronucleus assay is used. However, both broken DNA fragments caused by clastogenic agents and mis-segregated chromosomes caused by aneugenic agents can lead to the micronuclei formation. To confirm an aneugenic mode of action, a laborious centromere or FISH staining is required.

The assay is build around the reporter technology that was developed for the ToxTracker, TubulinTracker uses a Tubulin-GFP fusion report that allows for direct visualisation of microtubuli, using high content imaging or flow cytometry. In the TubulinTracker assay, the GFP-Tubulin reporter cells are exposed to various concentrations of a test compound. After treatment, cells are permeabilised to extract the free GFP-Tubulin. After fixation, the remaining polymerised GFP-Tubulin in the cells is quantified using flow cytometry.

To measure the effect of compounds on Tubulin polymerisation, the amount of GFP-Tubulin signal in microtubules is quantified using flow cytometry. A DNA staining is included during the analysis to simultaneously assess the effect of the agent on the cell cycle progression. Exposure of cell to Tubulin poisons typically results in an accumulation of cells in mitosis. Exposure to compounds that affect cell cycle progression but not microtubule stability, such as DNA reactive compounds or Aurora kinase inhibitors, did not affect polymerised GFP-Tubulin signals. 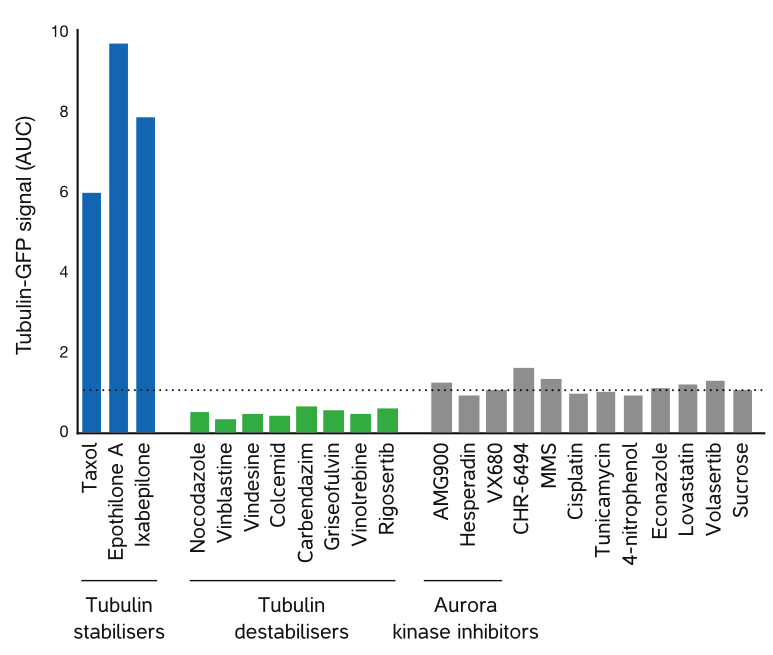 For the validation of TubulinTracker, the GFP-Tubulin cells were exposed to  for 4h to 10 concentrations of the test substances. The fraction of polymerised Tubulin was determined by flow cytometry and quantified by calculating the area under the curve (AUC). Compounds were classified as microtubule stabiliser in case the relative AUC was >2, or as microtubule destabiliser when the relative AUC was <0.5. The tested genotoxic and non-genotoxic compounds that did not affect microtubule stability all resulted in a relative AUC around 1 (dashed line).

Toxys offers TubulinTracker as a service from our state-of-the-art laboratory in Leiden, the Netherlands. You can send your compounds and receive a full report, in most cases within 2-3 weeks.

The following infographic depicts the typical workflow when doing a project with Toxys.

TubulinTracker in Japan via Eolas Biosciences

Toxys has partnered with Eolas Biosciences to include TubulinTracker in their portfolio of genetic toxicology services for the Japanese Market. Visit this page to learn more.

These are some of the typical application of TubulinTracker:

Meet the study director for TubulinTracker

Our study directors are the experts in the field to whom you can ask any question about our assays. From early screening to regulatory safety assessment, our study directors are able to listen to your questions and think along with you to provide a tailored solution. Here are some typical questions they often receive on TubulinTracker in understanding where and how TubulinTracker can be utilized in their strategies. Please feel free to ask your questions as well.

Can I meet you to talk about my study design?

I would be more than happy to think along with the best study design for your project. Please just reach out to set-up a meeting to discuss the study design.

Will you also take me through the data after a project in a TC or meeting?

Certainly, once we have shared the draft report and you have had to opportunity to go through the project report, we will schedule a TC to discuss the project with you and answer any questions you might have. You can also always contact me via email or give me a call if you would like to know more.

Inger Brandsma obtained her PhD from the Erasmus Medical Centre in Rotterdam, where she studied the role of changes in DNA double strand break repair in cancer cells relating to resistance to PARP inhibitors. Inger joined Toxys as a senior scientist, utilising her expertise in DNA damage responses, genome stability and cancer to develop novel mechanistic toxicity assays. Inger was pivotal in developing ToxTracker extensions for ToxTracker ACE, AO and TubulinTracker.

Can you help with a study design for difficult to dissolve compounds?

Do you also have a question? Click here te send a question to Inger.

Inger:
Do you also have a question? Click here te send a question to Inger.
Ask a question or get a quote