ToxProfiler is a unique New Approach Method (NAM) that can be applied to accurately quantify the cellular stress responses induced by chemicals. The assay can be applied to reveal the toxicological mode-of-action (MoA) of novel medicines, (agro)chemicals, cosmetics and food ingredients. ToxProfiler consists of 7 genetically engineered HepG2 cell lines. Each cell line contains a specific fluorescent reporter that is associated with a specific cellular stress response pathway. All fluorescent reporters are expressed at physiological levels and reflect the endogenous cellular stress responses. Automated live-cell confocal microscopy and image segmentation pipelines are applied to generate a toxicological fingerprint for each compound representing the cellular stress responses that are activated upon exposure. ToxProfiler is particularly applicable for early chemical safety testing by providing insight into the toxic MoA of compounds, as well as read-across, adverse outcome pathway (AOP) and weight-of-evidence (WoE) approaches. 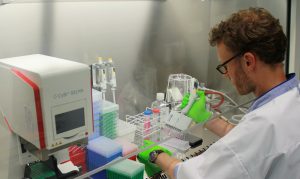 ToxProfiler is available directly from Toxys and is performed at our state-of-the-art laboratory. You can send your compounds and receive a full report, in most cases within 4 weeks. The report will provide quantitative information on the activation of the various cellular response pathways and toxicological endpoint that are investigated by ToxProfiler.

The ToxProfiler reporter cell lines are routinely cultured in a 2D monolayer following standard protocols. The automated high content imaging pipeline allows for accurate quantification of stress pathway induction over time with a single-cell resolution. Activation of the cellular stress responses is correlated to a toxicological effect. Quantitative dose-response modelling is applied to determine point-of-departure (PoD) for a toxic effect and potency ranking of compounds.

The ToxProfiler assay consists of 7 reporter cell lines which are developed for unique biomarkers that each represent a distinct stress response pathway. Each reporter represents the activation of a specific cellular stress response by increased expression or change in cellular localisation. Please read more about the biomarkers on the tab principles.

From sample to report 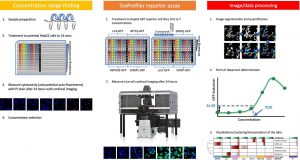 With the PODplotter software, we can accurately determine the POD, which is the lowest concentration at which a significant reporter induction was observed. A standard ToxProfiler report contains the following information:

Using live-cell confocal imaging and automated image segmentation pipelines, we can accurately quantify the GFP levels in a specific subcellular localisation with a single cell resolution, as shown below. The figure below also shows the induction of the 7 different stress pathways with various compounds.

The GFP induction levels at each concentration are presented as concentration-response plots and easy to read hierarchical clusterings with a heatmap. This allows for an easy interpretation of the stress pathway induction. In the example heatmap below, ToxProfiler was able to generate data that was analogous with in vivo data. The in vivo data showed that compounds 2,3 and 4 put forth a similar pathological outcome, with which ToxProfiler correlates to as these compounds show similar toxicity profiles.

These studies confirmed that the assay is compatible with many types of pharmaceuticals, chemicals, and nanomaterials. Various studies have been published on the ToxProfiler technology and you can find them here. Should you wish to learn more about the compounds that we have tested or our experience with specific classes of compounds, please contact us at info@toxys.com.

ToxProfiler has been successfully applied as a fast and reliable screening assay to unravel the toxicological mode-of-actions (MoA). Examples of the most commonly used applications for ToxProfiler:

Chemical exposure can lead to cell injury that can lead to cell death and disease. Often the cell injury initiates various cell stress response signalling pathways. Strong activation of these pathways reflects the onset of toxicity. ToxProfiler can be applied to accurately quantify the chemically induced stress pathways to reveal the toxicological mode-of-action of novel medicines, (agro)chemicals, cosmetics and food ingredients. Automated live-cell confocal microscopy and image segmentation pipelines are established in this assay to generate a fingerprint of the cellular stress responses that are activated upon exposure of the cells to a compound. 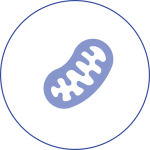 Oxidative stress is the imbalance between the reactive oxygen species that are produced and the cell’s ability to neutralise these formed reactive intermediates. Chemicals can interfere with the ROS balance which might eventually lead to several pathologies like cancer, heart disease, drug-induced liver injury (DILI) or Parkinson’s disease. SRXN1 is an antioxidant produced by the cell to counteract oxidative stress and serves as a reliable biomarker for this stress response.

Genetic stress is a direct consequence of DNA damage, resulting in a change in the basic structure of DNA. DNA damage can be a disruption to a base, a single or double-strand break, or a chemical addition to the DNA. DNA damage is linked to several pathologies of which cancer is the most obvious. P21 is a well-known protein involved in the p53 dependent cell cycle inhibition in response to DNA damage and serves as a reliable biomarker for this stress response. 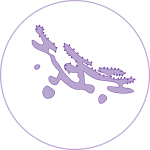 Endoplasmic reticulum (ER) stress occurs after disjunction of the ER, a cellular organelle that is critical for the protein folding and secretion, calcium homeostasis and lipid biosynthesis. Chemicals can interfere with proper ER function and by doing so cause several pathologies like drug-induced liver injury (DILI), cancer, ischemia or insulin resistance. CHOP is a well-known PERK/ATF4 dependent pro-apoptotic master regulator and biomarker of ER stress. 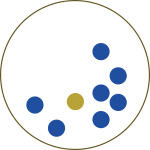 Autophagy is a natural cellular mechanism that degrades redundant or defective macromolecules. This process allows for the regulated degradation and recycling of cellular components. Autophagy is often induced after starvation, hypoxia or (chemically induced) cell damage. LC3 is a key player in the autophagy process. The number of LC3 positive autophagosomes are indicative of the activation of the autophagy process. 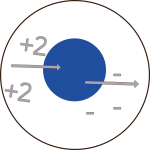 Ion stress is the imbalance of the cellular ion homeostasis. Both physiological as well as xenobiotic ions can disrupt this balance. Ions (heavy metals) can bind to oxygen, nitrogen and sulfhydryl groups in proteins. This can alter enzymatic activity and increase the ROS or RNS stress, resulting in a variety of pathologies. MT1X is a metallothionein which is strongly upregulated upon ion stress and capable of binding ions and detoxify them. 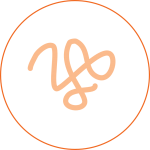 Protein stress is the imbalance of protein homeostasis, a condition that is broader then unfolded protein response/ER stress. Protein stress is induced after increased temperatures, oxidative stress, ER stress and heavy metal stress. Unfolded or misfolded proteins can cause several pathologies like cancer, drug-induced liver injury (DILI) and several neurogenerative diseases. HSPA1B is a chaperone involved in protein folding and strongly induced after protein stress. 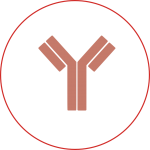 Inflammation is a protective response to harmful stimuli such as pathogens, damaged cells or irritants. Chemicals can affect this process directly, causing the irritation or damage or by inhibiting the inflammation response. Both can lead to a variety of pathologies like drug-induced liver injury (DILI), atherosclerosis, fever. ICAM1 is a protein involved in leucocyte requirement/binding and is induced after cytokine-induced inflammation responses.

The cytotoxicity of compounds is determined using the propidium iodide stain (in red) in the parental HepG2 cell line. Using the HOECHST stain (in blue), the nuclei are counted so that the effects on the cell cycle (e.g. mutagenicity) can be detected. Using our PODplotter software, we can accurately quantify the lowest concentration at which a significant induction of cytotoxic or mitogenic responses is observed. In the project report, this data is presented in concentration-response plots and the PODs. 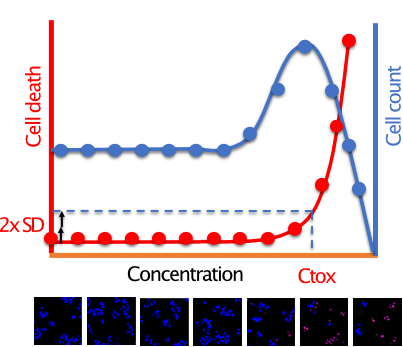 Quantification of GFP level with a single-cell resolution

In the second phase of the ToxProfiler assay, the various stress responses are quantified using the ToxProfiler human reporter cell lines, in which 7 sub-cytotoxic concentrations are included. Using live-cell confocal imaging and automated image segmentation pipelines, the GFP levels and the specific subcellular localisation is determined with a single-cell resolution. 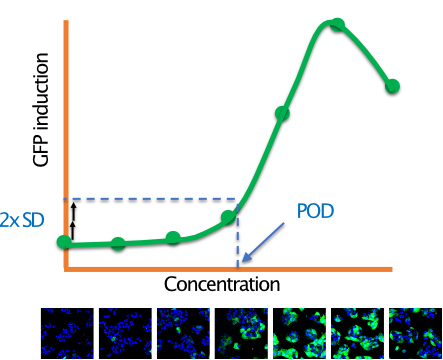 The PODplotter software is applied to determine the lowest concentration at which a significant stress pathway reporter response is observed. This data is presented in a table as well as a heatmap so that the stress pathway fingerprint of each chemical can be easily and directly compared to another. The clustering allows for easy observation of  (dis)similarities in the responses. 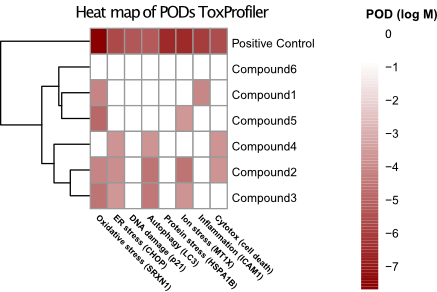 On 8 April 2021, we organised a webinar introducing ToxProfiler and discussing how the assay generates a toxicological fingerprint of compounds and its applicability for broad toxicity profiling. Please click on the video below to find out more.

Here you are able to find the publications that explain the technology and science behind ToxProfiler.

Meet the study director for ToxProfiler

Our study directors are the experts in the field to whom you can ask any question about our assays. From early screening to regulatory safety assessment, our study directors are able to listen to your questions and think along with you to provide a tailored solution. Here are some typical questions they often receive on ToxProfiler in understanding where and how ToxProfiler can be utilized in their strategies. Please feel free to ask your questions as well.

Can I meet you to talk about my study design?

Yes, I would be happy to plan a teleconference meeting to discuss the project for which I will make a study proposal that we can discuss and adapt.

Will you also take me through the data after a project in a TC or meeting?

Definitely! I always plan a dissemination meeting after completion of the project report in which we discuss the results and can answer any questions that you still might have.

Bas ter Braak obtained his PhD at the Leiden Academic Centre for Drug Research (LACDR).  He co-developed the HepG2 BAC-GFP reporter platform that is central to ToxProfiler. Bas joined Toxys in 2020 as a senior scientist to run ToxProfiler and further expand the assay with his knowledge in compound-induced stress signalling processes in differentiated reporter cell lineages.

Can you help with a study design with different types of solvents?

We have experience with different types of solvents and have established for a number of these the maximal concentrations which do not trigger a response in any of the ToxProfiler readouts. I would be more than happy to further discuss what solvent you would like to include and how we can incorporate this in the study design.

If you have any questions on the assay please contact us via info@toxys.com or complete the contact form. Please also see: